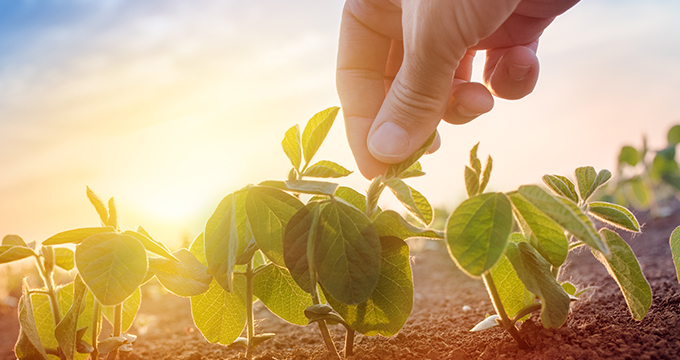 Click on the ENROLL NOW link on the left.

Jim has been a director and the chief executive officer of the bank since June 1979.  He and his wife, Sharon (a part time bank officer/employee) are natives of Bloomington/Normal and lifelong residents of central Illinois.  They reside in Colfax and have one son and two granddaughters.

Jim began his banking career as a part time teller at First National Bank of Normal in Normal in 1968, while a student at Illinois State University.  After graduation from ISU he stayed with First National, advancing to Cashier, in charge of all operational areas.

In 1977 he helped organize and charter the Bank of Kenney (Kenney, IL) and served as CEO and director until coming to Anchor.  He continued to serve as a member of the board of directors at Bank of Kenney until August 2005.

In his spare time, he enjoys golfing, reading, and collecting antiques.

Chris is from the Arrowsmith, IL area.  He is a graduate of South Dakota State University, with a bachelor’s degree with an emphasis in Agriculture.  Prior to joining ASB, he has been involved in the banking industry as a relationship manager and loan officer in Minnesota and Illinois.

He and his wife currently reside in the Farmer City, IL area with their son.  He is involved with his family’s farm operation and several local community organizations.

Karen has been employed by the bank since June 1996.  She and her husband, a retired grain and livestock farmer, reside in rural Saybrook.  They have a son and two daughters, in addition to seven grandchildren.

Karen is a lifetime area resident. She joined the bank as an Assistant Cashier in June 1996 and was promoted to Cashier and Assistant Trust Officer in August 1999.  She started her banking career at the Arrowsmith Bank and was employed there for several years before joining ASB.

She is a graduate of the Midwest School of Banking sponsored by the Community Bankers Association of Illinois.

When not working at the bank or on the farm, Karen enjoys spending time with her grandchildren and working with her horses.

Kamey, a native of LeRoy, is a graduate of LeRoy High School and Parkland College. She began her banking career in 1999 and joined the bank in 2014.  She and her husband have a son and a daughter and reside in rural Saybrook.

Before becoming a mother, Sharon worked 17 years for Country Life Insurance.  After her son went off to school she worked as a secretary and bookkeeper in a small office.  She has worked at the bank since June 1995 and in March 2001 she was promoted to Assistant Cashier.

From March to December 2005 she was on “loan” to the Bank of Kenney gaining valuable banking experience and working as an operations supervisor/branch manager.

When she has spare time, she enjoys gardening, antiques, and riding her quarter horse, Jack.

Marguerite is a graduate of Ottawa High School and lives in Colfax with her husband.  They have a son and a daughter.   She joined the bank in 2008.    She enjoys gardening and tending to her pets.

Merle has been a director of the bank since January 1974.  He and his wife are lifelong residents of the area and reside in Saybrook.  They have three children and three grandchildren.Merle is the retired owner of Coile’s Diesel, a diesel engine repair firm.  He is active in his church, a follower of Ridgeview sports, and enjoys traveling.

Dan joined the board in March 2010.  He and his wife are long- time residents of the area and reside in rural Anchor.  They have a son and a daughter, as well as three grandchildren.Dan farms actively with his brother.  He also enjoys sports and playings golf.

Gayle has been a director of the bank since April 1993.  He is a lifelong resident of the area and resides in rural Gibson City.  He is active in farming and other business ventures.

Jeff has been a director of the bank since April 1993.  He is a lifelong resident of the area and resides in Saybrook.  He has one son.

He is Vice President of Coile’s Diesel, Inc., a diesel engine repair firm.

Kris is a native of Geneva, IL (when it was still rural).  A graduate of Ohio Wesleyan University, Kris worked for a Top 10 financial institution and was involved in various areas of banking, for over 21 years.  For the past 10 years, he has served as Chief Financial Officer of Echo Health, Inc., a private family-owned business, specializing in healthcare payment systems.

He and his wife live in rural Columbia Station, OH with their daughter and two sons. His passion is lacrosse, which he coached for several years and he enjoys watching his son play at Benedictine University in Lisle, IL.

Dan is a graduate of Case Western University in Cleveland and received his law degree from Chicago Kent College of Law at the Illinois Institute of Technology.  He served in various leadership roles in banking for over 20 years and for the past 5 years, he has served as CEO of Citymark Capital, a real estate investment company focused on multifamily properties.

Mike grew up and lives in Northeast Ohio and is a graduate of John Carroll University.  Mike is Chief Investment Officer of ECHO Health, Inc., where he is responsible for overseeing the Company’s venture capital and corporate investment portfolios. Prior to joining ECHO Health, Inc. in January 2019, he was an investment banker for 19 years representing mostly financial institutions.

In addition, to his roles at Anchor and ECHO Health, Mike currently serves as a member of the Board of Directors for banks in Las Vegas, Nevada and Middlefield, Ohio.  Mike volunteers with Positive Education Program, Greater Cleveland’s largest non-profit agency serving developmental needs of children. Mike and his wife are watching their two kids and two dogs grow up way too fast and hoping the dogs don’t go away for college too!